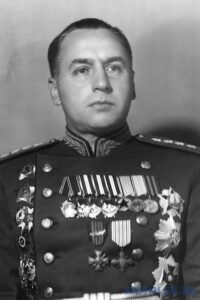 Was a graduate of the Military Academy in 1921, who subsequently joined the Red Army. In 1941, he was chief of the Soviet staff at the south-western and southern fronts and from 1945 was the formal head of the Soviet General Staff.

Despite his key role in the Red Army’s ultimate victory over the Germans, he was never nominated Marshal of the Soviet Union. Antonov was present at conferences in Moscow, Yalta and Potsdam. At the Yalta conference he presented the military situation in Europe and insisted on greater intensity of Allied bombardment of German communication lines. After the war, Antonov was the chief commander of the Trans-Caucasian military region. In 1955, he became Chief of Staff of Allied Forces of the Warsaw Pact (political and military alliance of communist states formed in response to NATO). He held this post until his death in 1962.