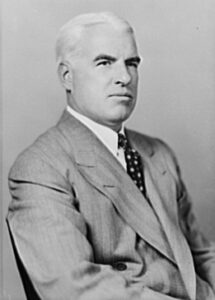 Was an American businessman, who in 1944-1946 acted as US Secretary of State under Presidents Franklin D. Roosevelt and Harry S. Truman and in 1945-1946 served as US ambassador to the UN.

From 1926 he worked at General Motors, where he supervised assistance programs to the unemployed. In 1938, he became chairman of the largest American corporation, US Steel. Stettinius was also an administrator of the “Lend-Lease” program (1941), military assistance to European allies and China fighting Germany and Japan. At the Yalta conference he was a close advisor of the US President. He headed the US delegation to the United Nations Conference in San Francisco on 25 April - 26 June 1945 bringing in delegates from 50 countries to create the United Nations (UN).