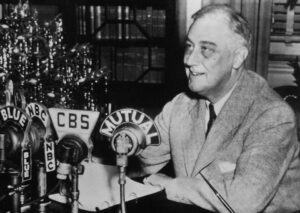 Also known as FDR, was an American politician, who from 1933 to his death in 1945 served as the 32nd President of the United States.

In response to the greatest economic crisis in US history, he enacted the so-called “New Deal” in 1933-1939, an economic stimulus program of reconstruction and reform. After the Japanese attack on Pearl Harbor on 7 December 1941, which he called a "day of infamy," Roosevelt declared war on Japan and several days later on Germany and Italy. During the war he joined the coalition of the Big Three, together with British Prime Minister Winston Churchill and Soviet leader Joseph Stalin, which led Allied forces to victory over the German Third Reich. During this entire time Roosevelt supervised mobilisation of the American economy to support the war effort. He also initiated construction of the first atomic bomb in the world and was a co-founder of the United Nations. Since the 1920s, the US President suffered from polio and in the last years of the war his state of health systematically declined. He died shortly after the end of the war in April 1945. Franklin D. Roosevelt is considered to be one of the most outstanding presidents in US history and one of the most important figures of the 20th century.