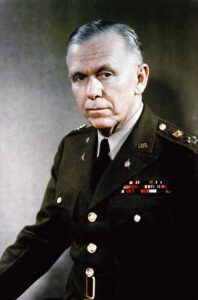 Was a US Navy commander-in-chief and statesman, and Chief of Staff of the U.S. Army under Presidents Franklin D. Roosevelt and Harry S. Truman.

Winston Churchill praised Marshall by calling him the "architect of victory" leading to the Allied triumph in the Second World War, despite refusing the position of Supreme Commander of the US Army ultimately assumed by Dwight D. Eisenhower, later US President. After the war, as Secretary of State, Marshall called for considerable US economic and political engagement e in the post-war reconstruction of Europe. The “Marshall Plan” indeed bears his name. In 1953, he received the Nobel Peace Prize. As Chief of Staff, Marshall was the architect of one of the greatest military expansions in US history. Until the end of the Second World War, Marshall coordinated Allied operations in Europe and the Pacific. Time magazine named him Man of the Year in 1943.