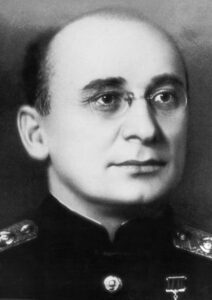 Beria was the longest-serving and most influential head of the Stalinist secret police. After the Soviet invasion of Poland in 1939, he was responsible for organising the massacre in Katyń (series of mass murders of approximately 22,000 Polish officers and intelligentsia by the NKVD). Beria was responsible for expanding the extensive network of the Soviet repression apparatus, the so-called Gulag camps. At the time of Germany’s invasion of the Soviet Union, Beria acted as an actual Marshal of the Soviet Union by leading field units of the NKVD responsible for sabotage on the Eastern front. At the Yalta conference Stalin introduced Beria to US President Franklin D. Roosevelt as "our Himmler." After the war, Beria organised the takeover by the Soviet apparatus of state institutions in East and Central Europe as well as the brutal apparatus of political repression in these countries. He also supervised the Soviet atomic bomb project. After Stalin’s death in March 1953, Beria became Deputy Premier of the Soviet Union and head of the Ministry of Internal Affairs. A coup d’état in June 1953 removed him from power. He was charged with treason, sentenced to death and executed on 23 December 1953.