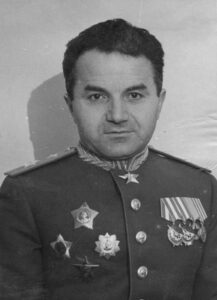 Was a Soviet military man and Air Force Marshal. In 1917, he joined the Red Guard and later the Red Army in 1919. In 1931, he was sent to the Zhukovsky Air Force Academy.

After Germany’s attack on the USSR, he became Air Force Chief of Staff on the Western front and in February 1942 commander of this front. In 1943, he was nominated Chief of Staff and Deputy Commander of the Red Army Air Force. In 1945, he took part in the Yalta conference as a consultant on matters relating to the role of air power in the fight against Germany. In June 1945, in connection with a planned attack on Japanese forces, he headed the 12th Air Army within the framework of fighting on the Trans-Baikal front. In December 1945, he was arrested by the NKVD under the charge of treason, subsequently sentenced to death, demoted, stripped of distinctions and executed.