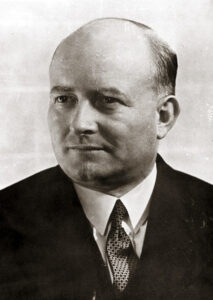 was a Polish politician, Prime Minister of the Polish Government-in-Exile during the Second World War, and subsequently Deputy Prime Minister in post-war Poland until 1947.

When Nazi Germany invaded Poland in September 1939, Mikołajczyk was a private in the Polish Army and served in the defence of Warsaw. After Warsaw fell, he escaped to Hungary where he was interned. He escaped soon afterward and reached Paris, where he joined the Polish Government-in-Exile. In July 1943, after the death of Gen. Sikorski in an air disaster in Gibraltar, he became Prime Minister of the Polish Government-in-Exile. In April 1943, when the Germans disclosed their discovery of a mass grave with almost 22,000 Polish officers murdered by the Soviets in the Katyń Forest, Stalin severed relations with the exile government after Mikołajczyk’s refusal to accept Soviet clarifications pointing to the Germans as the perpetrators. Mikołajczyk unsuccessfully sought to reach an agreement with the USSR on Poland’s eastern border and on the Polish government in Poland. He was unaware that decisions had already been made at the Big Three meeting in Tehran in 1943 with the bypassing of the Polish government. When he learned of the Tehran agreements on 24 November 1944, Mikołajczyk resigned as Prime Minister of the Government-in-Exile. After the Yalta conference, Mikołajczyk returned to the homeland and joined the communist supported Temporary Government of National Unity. As a politician affiliated with émigré circles and fearing arrest by communist authorities, he fled Poland in 1947 and immigrated to the US. As an émigré in the US, he no longer played a significant role and remained in political isolation. In 2000, his remains were brought to Poland. He was buried at the Cemetery of Distinguished Wielkopolan in Poznan.