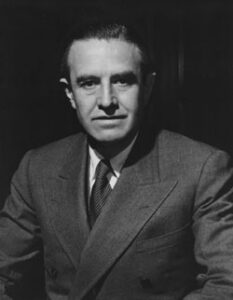 Better known as Averell Harriman, was an American politician, Democrat, businessman and diplomat. He served as Secretary of Commerce under President Harry S. Truman.

He was Democratic Party presidential candidate in 1952 and 1956, as well as a prominent member of a foreign-policy group known as "The Wise Men." As a close advisor to Roosevelt and his childhood friend, Harriman served as ambassador to the Soviet Union and took part in the most important conferences of the Second World War. In August 1941, he was present at the signing of the Atlantic Charter by the US President and British Prime Minister. In September 1941, Harriman was sent to Moscow to negotiate terms of a Lend Lease agreement with the Soviet Union. In summer of 1942, Harriman accompanied Churchill to a conference in Moscow at which the launching of a second front in Western Europe was discussed. In 1943, upon personal request of President Roosevelt, Harriman agreed to serve as US ambassador in Moscow. Roosevelt valued him to such a degree that Harriman received a personal room at the Yalta conference, whereas the remainder of the US delegation clustered in communal quarters. After the war, Harriman coordinated implementation of the Marshall Plan, took active part in negotiation of a partial nuclear test ban treaty under President John F. Kennedy and was deeply involved in the war in Vietnam (1955-1975).