Art Responding to the War and the Holocaust

Translated from Polish to English by Mikołaj Sekrecki

The events of the Second World War, their mass scale and cruelty left a distinct trace in post-1945 art. Works referring to dramatic and often very private wartime experiences were created long after it ended assuming highly diverse forms: from symbolic monuments commemorating the heroes’ great bravery to highly dramatic narrative stories of Nazi camps and omnipresent death. The artists treated their works as a way to give testimony or express deeply hidden difficult emotions.

The dramatic wartime experience had a huge impact on post-1945 art, both created by the survivors and successive generations of artists, often still under the influence of the traumatic experiences of their own parents or grandparents. Incidentally, art was also present in Nazi camps throughout the war, where it was also a way to counterbalance and give testimony to camp life(1). Yet it was not until the end of the war that creative freedom came as well as the possibility to fully express those difficult experiences and feelings related to them. Works referring to the war and the Holocaust are not consistent as regards their form because the creators every time evoke very intimate personal experiences and family history. Thus the experiences and memories are transmitted individually. Consequently, on the one hand, gripping, if formally ascetic, works appeared just after the war like the series Executions by Andrzej Wróblewski, touching the audience’s emotions through its brutality resulting from an extreme reduction of artistic means. On the one hand, however, there are a number of later works, aiming to convince the viewer to reflect on the horror of war, often in a slightly more approachable fashion, the best example being the graphic novel Maus by Art Spiegelman.

A series of Wróblewski’s eight canvasses Executions (1948–49) still remains one of the most emblematic visual works created under the influence of the author’s wartime experiences. When the Second World War broke out, Wróblewski was 12 years old, which had a decided impact on his perception of the events he witnessed. In his paintings, the artist showed execution scenes, as if adopting a child’s perspective, hence the presence of a figure of a boy in many of them. Looking for an appropriate form to express the cruelty of the shootings, Wróblewski decided to present them in a realistic, figurative manner, that is referring to a human figure. Yet his realism represents a very individualistic take and deviates from the principles set by the 19th-century ‘fathers of realism.’ As a supporter of socially involved art, Wróblewski stuck to figuration yet radically reduced all other aspects of the painting, which was to make the viewer’s attention more acute and stir living emotions in him/her. In each successive painting of the series, the artist seems to go a step forward in terms of composition synthesis. Execution II shows a group of persons waiting to die; their presentation is characterised by slight simplification, yet the colours and the way the humans are shown do not yet signal what will happen to them in other works of the series. One of the most gripping post-war paintings by Wróblewski is Execution V, whose main protagonist is a boy casting a long dark shadow. Next to him stands a tall man (his head ‘did not fit into the frame’ – the artist intentionally cuts the field of presentation short) and another one who has literally fallen to pieces. The entire picture features cool hues of blue, for Wróblewski a symbol of death. This painting goes much beyond the ‘illustration of events.’ In its formal simplicity, the entire series is a visual reflection on the brutality of death and human solitude in the face of the unavoidable end, as well as on disintegration – literally, that is a body massacred by bullets, but above all metaphorically – the disintegration of a man who has survived the war yet has to reconstruct himself to live on. Just as was the case for the artist himself.

Art Spiegelman’s Maus, in turn, is an example of an entirely different visual story-telling approach to the war and the Holocaust. It is a graphic novel, an original type of comic book taking up important topics and to a great extent drawing from the visual arts. Its first volume Maus. A Survivor’s Tale was published in the United States in 1986. The comic-book novel is also based on the experiences of the artist himself, a son of a Polish Jew who survived the Holocaust. Although all the characters were presented metaphorically as animals, Maus abounds in dramatic or even drastic scenes intended to expose the true nature of man. Incidentally, the very selection of animals representing individual nationalities is somehow aimed at pointing out certain traits of character and attitudes adopted. The work by Spiegelman is one of the more original forms of passing on to the global public the testimony given by his survivor father while at the same time an artistic way to express the artist’s own emotions he had to cope with as a survivor’s child. Although Maus stirred much controversy after the publication of the first of the two volumes (Spiegelman was accused, inter alia, of having chosen the wrong medium for transmitting such content), the comic book was ultimately successful thanks to its economical and precise form and so it contributed considerably to the dissemination of knowledge about the Holocaust across large audiences.

The examples of post-war art and that which directly refers to the wartime and Holocaust experience presented here illustrate two different ways of recalling the trauma. Between them, there exists an entire spectrum of works intended to commemorate past events such as numerous monuments and museums. They also reflect the trace that such dramatic moments in history leave on the culture and life of contemporary man. 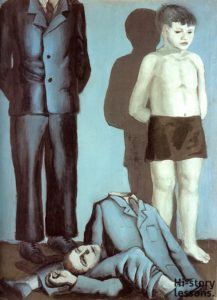