Translated from Italian to English by Laurence de Richemont

In 1919, at the initiative and under the direction of Walter Gropius, a school was founded in Weimar: the Bauhaus. Its purpose was to train a "new guild of artisans" to engage in integrating artistic and artisanal products into the new social and productive industrial environment. In this approach, form was subordinated to function, and all functions were complementary, none prevailed. In 1925, owing to contrasts with the city administration in Weimar, the State School moved to a complex designed by Gropius in Dessau. It was to become the symbol of educational efficiency and international culture: a place where teacher-mentor and student-apprentice relationships were to find ideal synergy. Throughout its history, the faculty collaborated with leading international figures like Hannes Meyer, Marcel Breuer, Johannes Itten, Wassilij Kandinskij, Paul Klee, Ludwig Mies Van der Rohe, Laszlo Moholy-Nagy and Oskar Schlemmer. 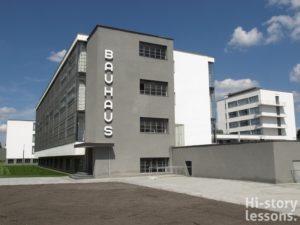