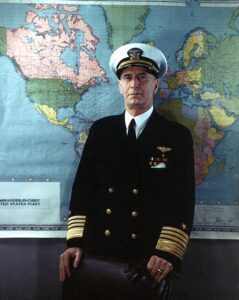 Was supreme commander of the US naval fleet (COMINCH) and head of naval operations (CNO) during the Second World War.

As COMINCH-CNO, he headed operations, planning and administration of the U.S. Navy and was a member of the Army staff. In 1898, he fought in the Spanish-American war as a young cadet. During the First World War he also served as a staffer at the US Atlantic Fleet and after its conclusion headed a submarine squadron and later the Aeronautics Office. After the Japanese attack on Pearl Harbor in 1941, King was appointed head of the US fleet. A shadow on his career was disregard for the lives of American seamen by persistently bypassing British advice on the security of organising Allied convoys and U-boat operations on the Atlantic.