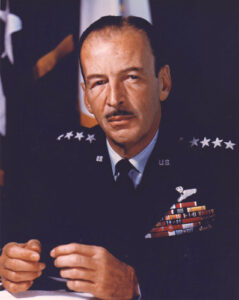 During the Second World War he served as deputy head of Allied tactical air forces in northern Africa and helped devise the American strategy of bombing raids over Germany. After the Second World War, he acted, among others, as head of the North American Aerospace Defense Command (NORAD). Kuter is considered to be one of the four main authors of the AWPD-1 plan, the strategy of bombing military and industrial sites in Germany. This plan essentially altered the manner of utilising airpower and air war strategy. Due to Gen. Arnold’s illness, Kuter was appointed as his representative at conferences in Yalta and Malta.