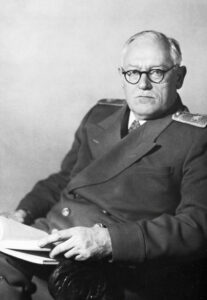 Was a Soviet politician, lawyer and diplomat. He was born as Andrzej Wyszyński in Odessa to a Polish Catholic family.

He acted as Prosecutor General of the Soviet Union at the Nuremberg trials and was responsible for Soviet preparations to try chief German war criminals before the International Military Tribunal in Nürnberg. In 1949-1953, he was the Soviet Minister of Foreign Affairs. In June 1940, he was sent to Latvia to form a pro-Soviet government and incorporate this country in the USSR. This ended with success – creation of the Latvian Soviet Republic. At the conference in Tehran in 1943 he nevertheless remained in the Soviet Union to supervise state matters during the absence of Soviet leaders. In February 1945, he accompanied Stalin, Molotov and Beria to the conference in Yalta. Upon returning to Moscow he was sent to Romania, where he supervised the takeover in 1945 of the administrative apparatus by communist authorities. Afterward, he again accompanied Stalin to the conference in Potsdam in July 1945. He died of a heart attack during a visit to New York in 1954.